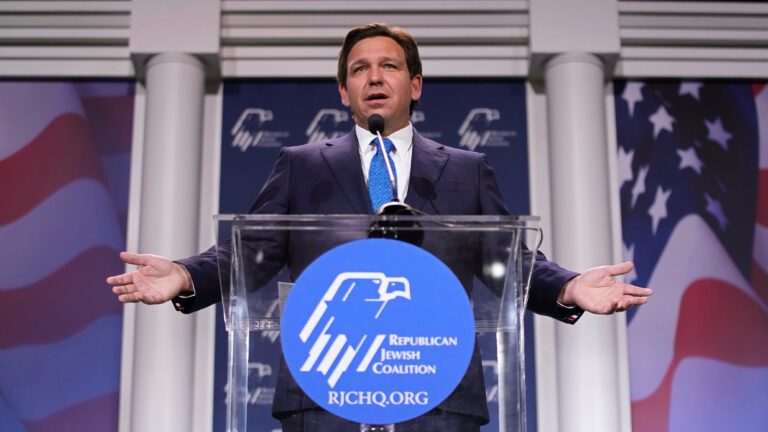 Republican Gov. Ron DeSantis meets with some of his leading contributors this weekend as he considers his next political steps following last month’s convincing re-election victory for a second four-year term steering Florida.

The governor and his wife on Sunday head to Miami for what’s being described as a dinner with top donors, according to sources familiar with details of the private event. It appears to be the first major huddle by DeSantis with top dollar donors since he defeated former GOP governor and Democratic congressman Charlie Crist by nearly 20 points in November’s gubernatorial election in the Sunshine State.

While sources say the dinner is an opportunity for the governor to celebrate his landslide victory with his major financial contributors, there will likely be a conversation of the road ahead and a possible White House run.

Pointing to the relationship between DeSantis and his donors, a source in the governor’s wider political orbit told Fox News, “Over the next few months, I think that courtship will become clearer, and the question then becomes what’s the timeline and what’s his path forward look like. I think that’s the question on donors’ minds as much as it is on everybody else’s minds.”

DeSantis for over a year has routinely discounted talk of a 2024 White House run as he stayed focused on his gubernatorial re-election. But he’s become a major force in the GOP as he’s built a political brand that stretches from coast to coast, and political prognosticators view him as a potential presidential contender.

While former President Trump, who launched his third White House run two weeks ago, is considered the clear front-runner in the GOP nomination race, DeSantis has seen his poll numbers in 2024 Republican presidential surveys start to rival Trump’s, and his fundraising prowess matches the former president’s.

And the governor potentially dropped some 2024 hints during his election night victory speech last month.

“We have rewritten the political map,” DeSantis declared. “While our country flounders due to failed leadership in Washington, Florida is on the right track.”

He took in the scene as a chant of “Two more years! Two more years!” broke out among supporters urging the governor to consider a national run in 2024.

Two weeks later, he delivered a keynote address that received multiple standing ovations at the Republican Jewish Coalition’s annual leadership meeting, seen as the first major GOP 2024 presidential cattle call. There, the governor repeated his well-used pledge that “we’ve got a lot more to do, and I have only begun to fight.”

And as Fox News first reported recently, DeSantis will chronicle his life in public service in a new book that will be released in late February in what will be seen by political pundits as another step by the conservative champion toward a possible 2024 presidential run. The autobiography by DeSantis is titled “The Courage to Be Free: Florida’s Blueprint for America’s Revival.”

Writing a book is a rite of passage for many potential and actual presidential candidates. Former Vice President Mike Pence, who’s likely to launch a White House run, is on a nationwide book tour for his new autobiography, “So Help Me God.”

As Fox News first reported two weeks ago, Pence’s book tour will bring him on Monday to the crucial early voting presidential nominating state of New Hampshire, which for a century has held the first primary on the road to the White House.

Pence will host two book signings for his new memoir, in which the former vice president gives an account of his career, including his four years serving under President Trump.

The former vice president, who’s long been a champion for social conservative voters, will hold a book signing in Manchester, New Hampshire, with Cornerstone, a non-profit Christian advocacy organization in the Granite State. And he’ll take part in a second book signing at the Wentworth by the Sea hotel in New Castle with the New Hampshire Federation of Republican Women.

FIRST ON FOX: PENCE BOOK TOUR BRINGING HIM BACK TO NEW HAMPSHIRE

Pence, who was busy the past year and a half crisscrossing the country to campaign and help raise money for Republicans running in the 2022 elections, has made multiple stops in Iowa, New Hampshire, South Carolina and Nevada, the first four states to vote in the Republican presidential nominating calendar. Pence has been making moves such as building relationships in the early voting presidential primary and caucus states that usually precede the launch of a White House campaign.

And Pence has already made stops during his book tour in Nevada last month and South Carolina on Tuesday.

Pence, in an interview with Fox News Digital last month, reiterated that a decision on whether he’ll run for president won’t come until next year and added that he and his wife Karen will “make a decision wherever we feel called.” He added that he and his wife and their children will “give prayerful consideration” to a White House run as they discuss it over the holidays.

Asked Friday in an interview with Fox News’ John Roberts if he’s leaning one way or another, the former vice president answered that “our hearts are always leaning towards finding a way to stand up for the conservative agenda, for the values that we’ve always advanced in our public career.

“Whether I’m a candidate or simply active in the cause, I’m never going to stop fighting for polices I wrote about in the book that characterized my career in the Congress, as governor of Indiana and as your vice president.”

Paul Steinhauser is a politics reporter based in New Hampshire.